After reviewing what the 802.11 standard says about TIM. Lets discuss in real world terms what a TIM is and how it works.

You will specifically find TIM in a management frame called a beacon. A beacon is triggered by default on an access point every 102us. Think of a beacon as a network advertisement. The beacon advertises specific <BSSID> wireless network information such as supported PHY rates, security protocols, supported QoS/WMM, vendor specific information and much much more. Included in the beacon is a TIM information element. 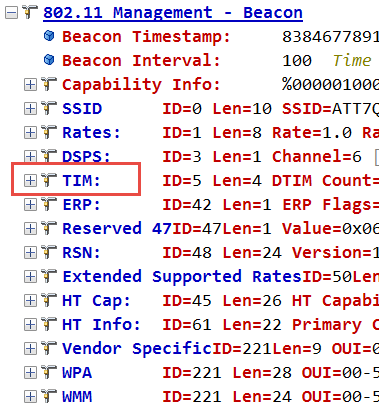 After reviewing what the 802.11 standard says about DTIM. Lets discuss in real world terms what a DTIM is and how it works.

You will specifically find DTIM in a management frame called a beacon under the TIM information element. DTIM is to broadcast / multicast traffic as TIM is to unicast traffic.

Under the TIM you will see DTIM count and DTIM period.

"Wi-Fi Doesn't Stand For Anything. It Is Not An Acronym. There Is No Meaning.”